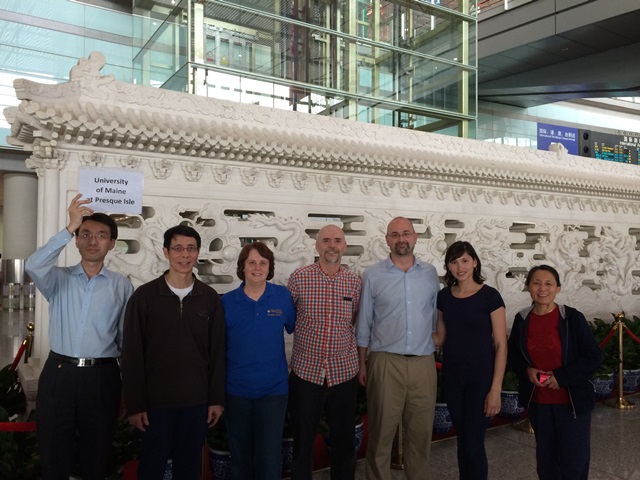 Let’s start at the beginning. It wasn’t too long ago that our President Linda Schott decided that a group of six of us would travel to China to strengthen old partnerships and create new ones with several Chinese education groups. That UMPI delegation included President Schott and her husband Tom Fuhrmark, Dr. Ray Rice, UMPI’s Interim Provost and Vice President for Academic Affairs, and his wife Rachel Rice, UMPI’s Director of Community and Media Relations; and Dr. Zhu-qi Lu, UMPI Professor of Math and his wife Huidu Lu. Dr. Lu and his wife served as our interpreters and guides.

Our goal: meet with Chinese education officials, determine where new collaborations could be made, interview students considering our University, and maybe squeeze in a little sightseeing on the side. In order to do all that, though, there was first the matter of getting to Beijing.

Our route: Presque Isle to Quebec City to Montreal to Chicago to Beijing. And there’s only one word to describe that: Yikes! The trip commenced on Monday, May 19, 2014, with a drive to Quebec City and a (brief) night’s rest. Our big day of travel started at 3:30 a.m. with a trip to the airport. Bad sign that our shuttle was half an hour late? We REALLY hoped not! Uneventful flights to Montreal and Chicago. Our walk through the airport took us past several sights (a restored plane here, a giant dinosaur skeleton there), and it was perfectly fitting that President Schott managed to find the one snowy owl in the place!

Nine hours into our travel day and we were aboard our Boeing 777 to Beijing. We’re not going to lie here–knowing that we had a 13 and a half hour flight ahead of us was a bit daunting, but luckily there were movies and snack breaks. Not a lot of sleep to be had, but we were plenty grateful when we touched down at the airport in Beijing.

Amid a sea of people and hand-written signs at Arrivals was one that read “University of Maine at Presque Isle” and then we knew everything was going to be just fine.

Our drivers took us to our hotel, the amazing China National Convention Center Grand Hotel (some of the stadiums from the Beijing Olympics are just around the corner from this spot–note the view from one of our hotel rooms, buildings everywhere and about 12 lanes of traffic).

After settling in, we enjoyed a lovely buffet dinner at the hotel with Xue Li and a few of our other hosts. More on the food in a later blog post, but can we just say how delicious authentic Chinese cuisine is? One last thing on our agenda for the day–a visit with a Chinese high school student who is planning to attend UMPI in the fall. He and his parents took the high speed train from their home to Beijing (a 3 hour trip that used to be more like 8 before the new train) in order to meet us. We had a lovely visit and are looking forward to welcoming our new student in the fall!